Judgment regarding an application to appoint an additional joint official liquidator (Angela Barkhouse, of Quantuma) of Performance Insurance Company SPC for the Bottini Insurance and SSS Insurance segregated portfolios, at the Grand Court of the Cayman Islands. 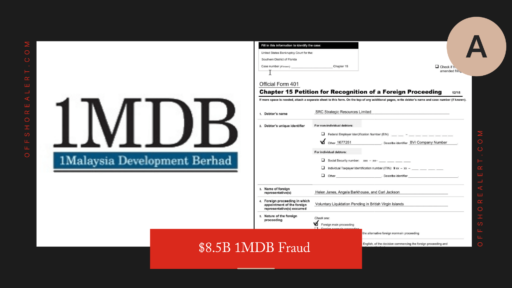 The liquidators of three British Virgin Islands companies that were involved in the $8.5 billion 1MDB fraud have applied for recognition in Florida as they hunt for assets that were, among other ways, allegedly siphoned off via investment funds in the Cayman Islands and Curaçao.

Chapter 15 Petition for Recognition of a Foreign Main Proceeding in the British Virgin Islands by Helen Janes, Angela Barkhouse, and Carl Jackson, as the Foreign Representatives of SRC Strategic Resources Limited, Bright Oriande Limited, and SRC International (Malaysia) Limited, all in Voluntary Liquidation, collectively described as being "part of the fraud perpetrated against 1 Malaysia Development Berhad, a sovereign wealth fund owned by the Malaysian Ministry of Finance, in which numerous entities and individuals formed a network to divert and distribute funds to the fraudsters who orchestrated the fraud and to individuals and/or entities connected to them", at the U. S. Bankruptcy Court for the Southern District of Florida. 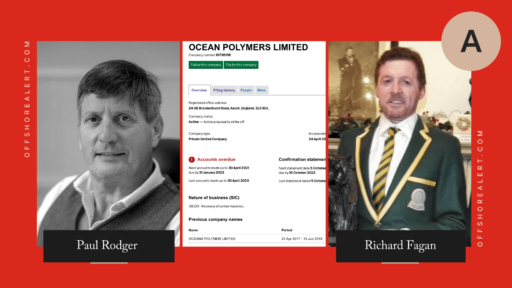 A seemingly fraudulent British company that has raised £1.4 million from investors to 'clean up the world's oceans' has belatedly filed its annual accounts to stave off forced dissolution. Ocean Polymers Ltd. filed its 2021 accounts two months' late on April 1st - one day after OffshoreAlert asked the firm's principals about a compulsory strike-off action by the Registrar of Companies.

Report of Commissioner Gary Hickinbottom regarding a British Virgin Islands Commission of Inquiry "into whether there was information that corruption, abuse of office or other serious dishonesty in relation to officials, whether statutory, elected or public, may have taken place in recent years". 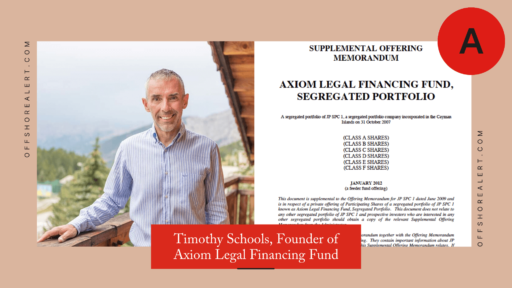 Ten years after his £120 million Cayman Islands-domiciled Axiom Legal Financing Fund fraud was exposed by OffshoreAlert, struck-off attorney Timothy Schools has gone on trial for fraud in England, along with another struck-off attorney, Richard Emmett, and a former financial advisor, David Kennedy, all of whom are British. 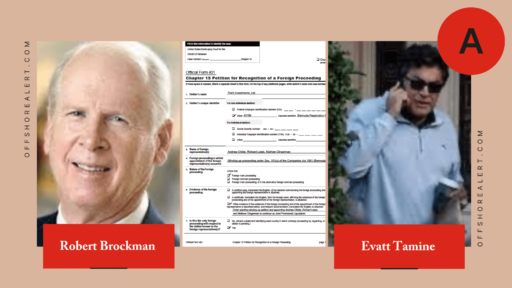 In an attempt to prevent the IRS from seizing assets in the United States, liquidators in Bermuda and the Cayman Islands have applied for U.S. recognition of their liquidation of a Bermuda company - Point Investments Ltd. - that was allegedly part of a $2 billion offshore tax fraud scheme involving billionaire Robert Brockman, 80.

Chapter 15 Petition for Recognition of a Foreign Main Proceeding in Bermuda by Andrew Childe, Richard Lewis, and Matthew Clingerman, as the Foreign Representatives of Point Investments Ltd., a Bermuda company whose ultimate beneficiaries include Robert Brockman, a businessman in the United States who is currently awaiting trial for an alleged $2 billion tax fraud scheme involving Point Investments and other entities in Bermuda, British Virgin Islands, Cayman Islands, Nevis, and Switzerland, filed at the U. S. Bankruptcy Court for the District of Delaware.

Complaint involving allegations of fraud against David Chung in Elizabeth Y. Chung, of Clara County, California v. Chung Peng Chih-Mei, described as a citizen of China residing in Taiwan, and Intertrust (Bahamas) Limited, of the Bahamas, at the U. S. District Court for the Northern District of California.

Criminal Information alleging tax fraud in USA v. Ronald L. Thomas, described as "a United States citizen who lived in Wellington, Florida, and intermittently Dubai, United Arab Emirates" and was "an independent contractor for a United States Department of Defense contractor as a Country Manager in Kabul, Afghanistan", "a Project Director in Oman for the Middle East", and a "paid consultant to a Mexican oil and gas joint venture", at the U. S. District Court for the District of Columbia.

Judgment that "fraud has not been proved in this case and the petition must therefore be dismissed" in Enigma Diagnostics Limited (in Liquidation) v. Harvey Boulter at the Grand Court of the Cayman Islands.

Complaint objecting to discharge of debt involving an alleged cryptocurrency-based fraud in tZERO Crypto Inc., of Utah v. Brett Buckman, of Bel Air, Maryland, at the U. S. District Court for the District of Maryland. 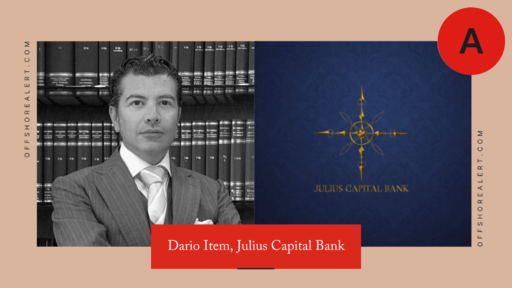 Madrid-based Swiss lawyer Dario Item, 49, who serves as Antigua and Barbuda's Ambassador to Spain, Liechtenstein, and Monaco, lied to Antigua's financial regulator when successfully applying for a bank license in 2018, apparently to conceal an investigation in Labuan that led to his corporate disqualification and the closure of his bank there the following year, OffshoreAlert can reveal.

Application by Zouzar Bouka, described as a citizen of France and an "entrepreneur and investor"; Vision Indian Ocean SA, of Madagascar, and ViMa Real Estate Sarl, of Madagascar, to take discovery from Symbion Power Services U.S. Inc., Symbion Power LLC, Symbion Power Holdings LLC, Symbion Power Africa LLC, Symbion Energy Holdings Ltd., and Paul Hinks for use a "contemplated proceeding in France" and a "criminal proceeding in Madagascar" regarding "Respondents' participation in a multi-million-dollar theft from the Mandroseza Power Plant, a project designed to bring reliable electricity to Madagascar, and their subsequent sale of interests in the Plant contrary to their contractual obligations and Malagasy law", filed at the U. S. District Court for the Southern District of New York.

Application for the appointment of a Commissioner to collect evidence from TD Bank NA and Wells Fargo Bank NA - pursuant to a request for judicial assistance from Poland - for a criminal investigation into suspected fraud by an "unknown subject(s)".

Complaint alleging "the false written and oral representations made by Crowe that caused Plaintiffs to invest tens of millions of dollars into a company whose supposed business was essentially a complete fiction with fictional revenues, fictional expenses and fictional assets", identified as Akazoo Limited, a.k.a. Old Akazoo, in Ursula Capital Partners LP v. Crowe UK LLP, a British accounting firm, at the U. S. District Court for the Northern District of Georgia.

Application for the appointment of a Commissioner to collect evidence from JPMorgan Chase Bank - pursuant to a request for judicial assistance from Belgium - for a criminal investigation into "Unknown Subjects for internet fraud and money laundering". 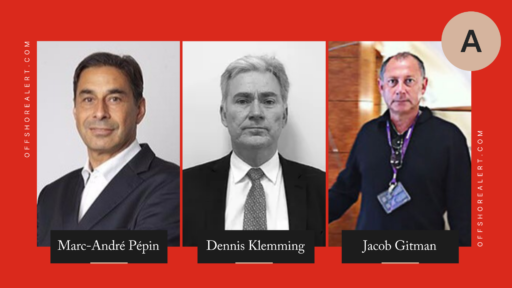 In a winding-up petition, Swiss investment manager Marc-André Pépin has been accused of "fraudulent misconduct and mismanagement" by Cayman Islands-domiciled SPI Investment Fund SPC, whose investors' funds have allegedly ended up in questionable arrangements with entities operated by Prudent Group, Dennis Klemming, and Jacob Gitman, all of Miami, Florida.

Affidavit in Support of Request for Extradition of Diogo Santos Coelho from the United Kingdom to the United States to face charges of fraud and identity theft involving "RaidForums", whose "website served as a platform where members could solicit for sale, sell, and purchase contraband", in USA v. Diogo Santos Coelho, described as a citizen and resident of Portugal, at the U. S. District Court for the Eastern District of Virginia.

Motion to Compel Compliance With Subpoena regarding an investigation into alleged securities fraud by Under Armour Inc. and related parties in Aberdeen City Council, as Administrating Authority for the North East Scotland Pension Fund, of Scotland; Monroe County Employees' Retirement System, of Michigan, and KBC Asset Management NV, of Belgium v. U. S. Securities and Exchange Commission at the U. S. District Court for the District of Columbia.

Complaint alleging fraud in G Esports Holding GmbH, d.b.a., G2 Esports, of Germany, described as "one of the world's leading esports' organizations, with a high-profile roster of esports teams and content creators" v. BDVL OÜ, of Estonia, d.b.a. Bondly Sports, described as "a company utilizing blockchain technologies for the development of non-fungible tokens", at the Superior Court of the State of California, County of Los Angeles. 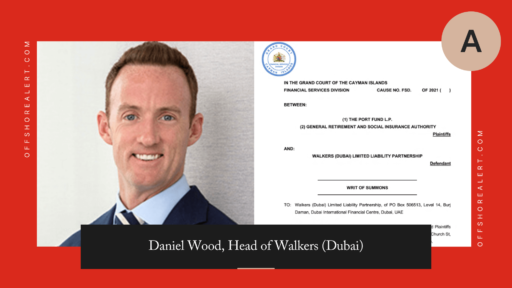 In a complaint that the Grand Court of the Cayman Islands concealed from the public for over two months, Walkers law firm in Dubai is being sued for at least $60 million in damages by a Qatar state-owned investor for allegedly providing "dishonest assistance" to a fraudulent investment fund known as Port Fund.

Second Superseding Indictment alleging fraud and identity theft involving "RaidForums", whose "website served as a platform where members could solicit for sale, sell, and purchase contraband," in USA v. Diogo Santos Coelho, described as a citizen and resident of Portugal, at the U. S. District Court for the Eastern District of Virginia.

Complaint to extradite Rainer von Holst from the United States to Germany to face allegations of investment fraud, filed at the U. S. District Court for the District of New Jersey.

Complaint alleging "a fraudulent scheme that sought to, and ultimately did, steal $488,000.00 worth of cryptocurrency from Plaintiff" in Ulises Fernandez Miro v. John Doe and Binance Holdings Ltd., of the Cayman Islands, at the U. S. District Court for the Southern District of Florida. 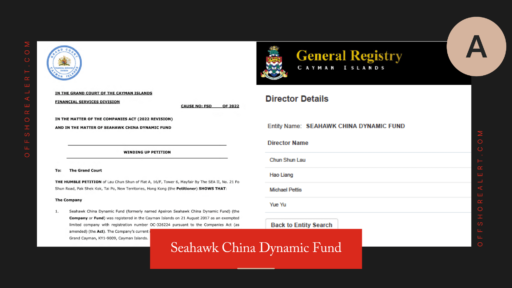 In a petition to wind up Cayman Islands-domiciled Seahawk China Dynamic Fund, 31-year-old investment manager Hao Liang, a.k.a. Henry Liang, has been accused of self-dealing and dishonesty by fellow Hong Kong resident Lau Chun Shun, who says he invested HK$191 million in the Fund.

Class Action Complaint in Boynton Beach Firefighters' Pension Fund v. Clarivate Plc, described as "an analytics company" that is domiciled in Jersey, in the Channel Islands, and based in London, England; Jerre Stead, and Richard Hanks at the U. S. District Court for the Eastern District of New York. 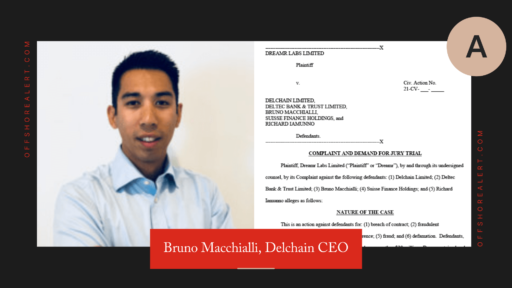 Bahamas-based blockchain firm Delchain and four others, including Deltec Bank & Trust in the Bahamas and Suisse Finance in Switzerland, are being sued for $20 million in damages after the price of a digital token issued by fellow Bahamas firm Dreamr "crashed 93%" within three months of being listed on the Bittrex crypto exchange.

Judgment regarding an application to prevent an automatic discharge from bankruptcy in Adrian Hyde and Edgar Lavarello, as Joint Trustees of Gregory King v. Gregory Hugh Colin King at Gibraltar Supreme Court.

Plaintiff's Motion to Entry of Default Against Defendant in ITZ Energy Associates FZE, of Ras Al Khaimah, in the United Arab Emirates v. CITIC Holding IF Group LLC, of Delaware, at the Superior Court of the District of Columbia.

Judgment regarding an ex parte application by Kuwait Ports Authority to share "Confidential Information with the State of Kuwait for use in the arbitration proceedings brought by Maria Lazareva against the State of Kuwait" at the Grand Court of the Cayman Islands.

Criminal Complaint alleging visa fraud, making false statements to the FBI, and acting illegally as a foreign agent of Russia in USA v. Elena Branson, a.k.a. Elena Chernykh, a dual citizen of Russia and the USA, at the U. S. District Court for the Southern District of New York.

Complaint alleging a €4 million investment fraud based around "developing Irish residential property" in Reena Reynolds and Shalini Sharma, both of Chicago, Illinois, USA v. Skyline Real Estate Investments, Paul Abeton, Frances Abeton, and Edward Declan Byrne, all of Ireland, at the U. S. District Court for the Northern District of Illinois.