Defendants' Motion to Dismiss regarding a dispute involving digital assets in Axtra LLC, of Wyoming, and The AXIA-Axtra Trust, described as “a unit trust formed under the laws of the Cayman Islands” v. AXIA Issuer Inc., described as "a for-profit corporation incorporated in the British Virgin Islands" whose "sole director ... is a corporation domiciled in Nevis", and AXIA Foundation Inc., described as “a non-profit corporation incorporated in the Commonwealth of Dominica” whose directors reside in Canada and Dominica, at the U.S. District Court for the District of Wyoming.

Complaint alleging breach of contract in Sprume.IO Ltd., described as a British Virgin Islands-domiciled "software development company that offers various blockchain-based services" v. Atlantic International Capital LLC, d.b.a. Digital Assets Group, described as a Florida-domiciled company "that marketed itself to Sprume as an experienced global team of financial experts" that "represented that it had a special relationship with key people at" Deltec Bank and Trust and Delchain Limited, both of the Bahamas, "that would enable it to onboard Spume to these platforms in a much shorter period of time than if Spume sought to obtain Deltec and Delchain services by itself", at the U.S. District Court for the Southern District of Florida.

Complaint for $1.7 million alleging breach of contract in Super Effect Investments Limited, of the British Virgin Islands v. Haili Wu, a.k.a. Haili Marshall; Derek Marshall, and California Wine Exchange at the U.S. District Court for the Northern District of California.

Petition for the Court's Sanction of a Scheme of Arrangement to privatize a publicly-listed company in the matter of China Binary New Fintech Group at the Grand Court of the Cayman Islands.

Petition for the Court's Sanction of a Scheme of Arrangement between the Petitioner, British Virgin Islands-domiciled Emerald Energy Holdings Limited "and the Scheme Shareholders" in the matter of Lifestyle International Holdings Limited, whose "principal activities ... are those relating to the operation of department stores, in particular the SOGO department store in Hong Kong, property development and investment in Hong Kong and the United Kingdom", at the Grand Court of the Cayman Islands.

Petition to Vacate Arbitration Award in DotC United Inc. and Avazu Inc., both of the British Virgin Islands v. Google Asia Pacific Pte. Ltd., of Singapore, at the U.S. District Court for the Northern District of California. 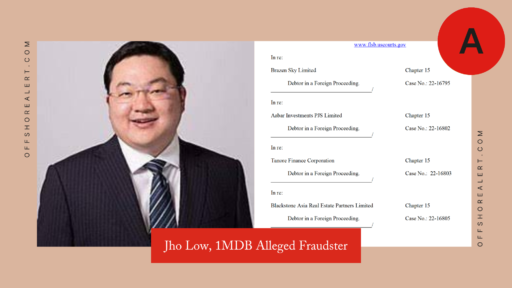 Liquidators of 9 BVI & Cayman entities ‘involved in $8.5B 1MDB fraud’ apply for Chapter 15 recognition in U.S.

The liquidators of eight entities in the British Virgin Islands and one in the Cayman Islands that were allegedly used to misappropriate and launder some of the proceeds of an $8.5 billion fraud involving Malaysia's 1MDB have applied for Chapter 15 recognition in the United States.

Chapter 15 Petition for Recognition of Foreign Main Proceedings in the British Virgin Islands and Cayman Islands by Angela Barkhouse, Helen Janes, and Carl Jackson, as the Foreign Representatives of Brazen Sky Limited, Aabar Investments PJS Limited, Tanore Finance Corporation, Blackstone Asia Real Estate Partners Limited, Vasco Investment Services SA, Selune Limited, Pacific Rim Global Growth Limited, and Affinity Equity International Partners Limited, and Angela Barkhouse and George Kimberley Leck, as the Foreign Representatives of Bridge Global Absolute Return Fund SPC, which were all "part of the fraud perpetrated against 1 Malaysia Development Berhad, a sovereign wealth fund owned by the Malaysian Ministry of Finance, in which numerous entities and individuals formed a network to divert and distribute funds to the fraudsters who orchestrated the fraud and to individuals and/or entities connected to them", filed at the U.S. Bankruptcy Court for the Southern District of Florida.

Petition for the Court's sanction of a Scheme of Arrangement in the matter of China VAST Industrial Urban Development Company Limited, based in Hong Kong, described as being "principally engaged in the business of (a) planning, development and operation of large-scale industrial towns, (b) property development, and (c) property leasing" in China, at the Grand Court of the Cayman Islands.

Fixed Date Claim Form regarding the Art Collection Trust, which "was established primarily to own a collection of fine art and chattels situated in a mansion house in Ireland", by Quadrangle Trust Company (BVI) Limited at the British Virgin Islands High Court.

Public Notice by the British Virgin Islands Financial Services Commission that it has imposed a fine of $30,000 on Quijano & Associates (BVI) Limited for regulatory breaches.

Petition for the Court's sanction of a Scheme of Arrangement in the matter of E-House (China) Enterprise Holdings Limited, described as "the ultimate holding company of a group of more than 300 companies that primarily carries on the business of real estate agency services, real estate data and consulting services and real estate brokerage network services in the People's Republic of China", at the Grand Court of the Cayman Islands.

Filing by the Joint Liquidators of British Virgin Islands-domiciled crypto hedge fund Three Arrows Capital Ltd. disclosing that the company is a defendant in an arbitration proceeding initiated by Genesis Asia Pacific Pte. Ltd., of Singapore, filed at the U.S. Bankruptcy Court for the Southern District of New York.

Application by Changpeng Zhao to take discovery from Bloomberg LP and Bloomberg Inc. for use in a defamation complaint in Hong Kong against Modern Media Company Limited, of Hong Kong, regarding an article that allegedly "contained false, malicious and defamatory statements about Zhao and his company, Binance Holdings Limited", a cryptocurrency exchange operator that is domiciled in the Cayman Islands, filed at the U.S. District Court for the Southern District of New York.

Supplemental Declaration of Russell Crumpler in support of Chapter 15 Petition in the matter of Three Arrows Capital Ltd. at the U.S. Bankruptcy Court for the Southern District of New York.

Judgment regarding an application from an anonymous "BVI law firm" that "sought to come off the record as acting for its client on the basis that the firm was professionally embarrassed" in a case styled only as "Ex Parte A Professionally Embarrassed Law Firm" at the British Virgin Islands High Court.