‘I see no evidence of fraud’, writes Grenada’s Chief Regulator

Letter to the Editor of Offshore Alert from Michael Creft, Grenada's Chief Regulator regarding the First International Bank of Grenada. 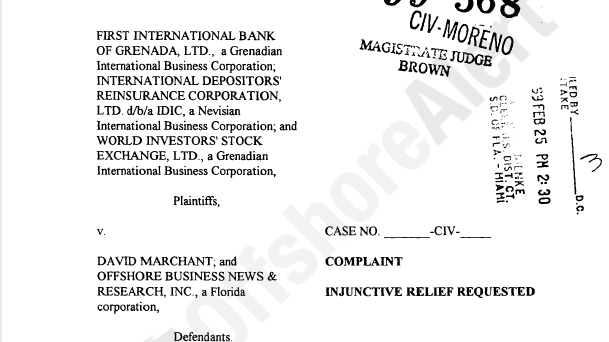 Offshore Alert's story about the banking/insurance scam that appeared in last month's edition of the newsletter has created quite a stir in the Caribbean. Several newspapers in the region followed up on the scandal, including those in Nevis, St. Vincent and Bermuda, and we received requests for assistance from the Royal Canadian Mounted Police and the the FBI.
04

Grenada began to come to grips this month with a financial scandal that is threatening to make the island the laughing stock of the offshore world. Three months after Offshore Alert exposed it as a fraud, the First International Bank of Grenada appears to be on the verge of being closed down by the local government.
30

The First International Bank of Grenada appears to be on the verge of collapse. A client filed a lawsuit against the bank this month alleging non-payment of a $300,000 one-month Certificate of Deposit and we understand that several other depositors are preparing similar lawsuits.
30

Questions and Answers with Grenada's Registrar of Offshore Services, Michael Creft, regarding the First International Bank of Grenada. 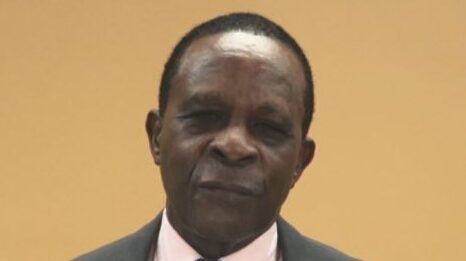 The massive financial scam being committed in Grenada by Canadian and American crooks has reached new levels of farce after the island's government announced that it had investigated - and cleared - the First International Bank of Grenada of any wrongdoing. Grenadian Prime Minister Keith Mitchell gave the bank a clean bill of health at a press conference held on July 23 and attended by local journalists.
31

IDIC moves to Grenada after being closed down in two jurisdictions

Grenada regulators have allowed the sham insurer known as IDIC to incorporate on the island after regulators in Nevis and Dominica closed down the company, we can disclose. IDIC was closed down by Nevis regulators on January 27, 1999 and, the following month, was shut down in Dominica, where it had moved.
31

Offshore Alert can this month reveal further disturbing details about the massive financial fraud that is being committed on the island of Grenada in what appears to be a joint effort between the island's government and the private sector. What is currently taking place in Grenada mirrors what happened in Montserrat in the late 1980s when approximately 300 'paper' banks established with phantom capital defrauded foreign clients of tens of millions of dollars before eventually being closed down by the UK police in 1989/90.
29

The founding chairman of the First International Bank of Grenada has informed Grenada's chief offshore regulator, Michael Creft, that FIBG has made a net income of $60 billion in its first two years in business. The astonishing claim is made in a rambling, 26-page letter sent by Van A. Brink (a.k.a. Gilbert Allen Ziegler) to Creft on December 23, 1999 in an effort to assuage the regulator's concerns about the bank.
29

Grenada's Registrar of Offshore Financial Services, Michael Creft, was described last year as being "apparently corrupt" by the first accountant who attempted to audit the books of the First International Bank of Grenada. In a letter to Prime Minister Keith Mitchell, Lauriston Wilson wrote that Creft's actions relating to FIBG were "suspect and lead to the inescapable conclusion that he is apparently corrupt".
30

Just when you thought it couldn't get any worse, the great Grenada banking scandal reached new levels of farce this month.One bank is operating without a banking licence, another is capitalized by a painting and the First International Bank of Grenada was still open for business at the end of June. Open, that is, to accept deposits but not to pay interest to its depositors, many of whom have complained to the island's regulators that they have not received interest payments for several months.Even allowing for corruption and incompetence, the refusal of the Grenada government to close down FIBG has led to one of the most bizarre situations in the history of offshore banking.
31

After allowing tens of millions of dollars to disappear and the crooks to flee the island, Grenada's government finally took over the First International Bank of Grenada this month. Government accountant Garvey Louison was appointed Receiver of FIBG on August 1 and immediately started preparing to liquidate the bank and all of its sub-banks.
30

Regulators in Grenada are continuing to allow banks belonging to the First International Bank of Grenada group to operate on the island despite FIBG's massive insolvency, we can reveal. The National Commercial Bank of St. Vincent, which is government-owned, is also continuing to provide banking services despite having its UK assets frozen recently over the FIBG fiasco.
30

The First International Bank of Grenada loaned $30,000 to the wife of Grenada's then chief regulator, Michael Creft, so that she could buy a car and another $50,000 to the then President of the Grenada Bar Association, Reynold Benjamin, according to a document sent to OffshoreAlert; Dean Cantrell and Marcel Deinnet snap up domains in names of countries in the Bermuda-Caribbean region, fraud complaint filed against 'offshore banker' Douglas Castle, 72-year-old convicted fraudster is back in business, SEC continues trend of failing to menaingfully punish accused fraudsters, First Ecom.com Inc. acquires half of First Ecommerce Data Services Ltd. that it did not already own, Antigua gaming outfit World Sports Exchange Ltd. sues County Savings Association over three checks that allegedly bounced, First American International Bank becomes latest offshore bank to be operated in Nevis without a license by Global Dominion Financial Services, and Latvia-based Paritate Bank appears to be in financial trouble.
04

In the public interest, we have posted two new documents on our web-site about the First International Bank of Grenada, which can be downloaded from www.offshorebusiness.com/fibgpage.htm.   Both documents are emails that were sent last year, one from FIBG founder Van Brink to Tai Hastey on March 28, 2001 and the other from British barrister Lawrence Jones to Brink on June 8, 2000.
31

One of the principals of a now defunct Grenada-registered bank has been sentenced to five years and 11 months in prison in the United States.Daniel G. Danker, 53, was also fined $50,000 and ordered to pay restitution of more than $20 million at the U. S. District Court for the Southern District of Indiana on July 15, 2001.
08

In his Third Report dated June 1, 2002, the liquidator of the First International Bank of Grenada has again warned creditors that there may not be any dividend distribution.Marcus A. Wide, of PricewaterhouseCoopers, advised "there is a real and distinct possibility that there will be no distribution whatsoever made by the Liquidator to the FIBG depositors/creditors".
31

First International Bank of Grenada founder Van Brink stripped $4.5 million of assets out of the bank not long before it went bust, according to its liquidator.In his third report to creditors dated June 1, 2002, Marcus A. Wide, of PricewaterhouseCoopers, reported that details of the asset transfers were contained "unsigned minutes from FIBG's June 2000 Board of Directors meeting".
30

Grenada Prime Minister Keith Mitchell has denied accepting $500,000 for appointing a United States fraudster to a diplomatic position.An allegation that Mitchell received a cash pay-off at Eric E. Resteiner's home in Switzerland in 2000 has been made by Resteiner's former Director of Security, Timothy Lee Bass, a U. S. national now residing in Illinois.
26

Prison sentence for another Grenada banker

Yet another principal of a fraudulently-operated, Grenada-licensed offshore bank has received a prison-term for fraud in the United States.Carl H. Lane, of Atlanta, Georgia, was sentenced to 30 months in prison and ordered to pay restitution of $1.058 million at the U. S. District Court for the Northern District of Georgia on June 29, 2005.
10

An American who is suspected of bribing the Prime Minister of Grenada for appointing him to a diplomatic position has pleaded guilty to unrelated fraud charges in the United States.Eric Resteiner, 46, pleaded guilty to five counts of wire fraud and two counts of mail fraud at a change of plea hearing that was held at the U. S. District Court for the District of Massachusetts on February 8, 2006. He is due to be sentenced on May 8. Under a plea agreement, the remaining 53 counts, including 18 regarding money laundering, which carry the harshest penalties, will be dismissed.
20

Two defendants face lengthy prison sentences after admitting their involvement in an investment fraud perpetrated by the First International Bank of Grenada.Robert Skirving and Rita Regale each pleaded guilty to one count of conspiracy to commit money laundering regarding FIBG's fraudulent proceeds at the U. S. District Court for the District of Oregon on July 19, 2006.
09

The cold reality of life behind bars has persuaded former offshore banker Paul Morgan Jones to start turning over his assets to the Receiver of Cash 4 Titles, which perpetrated one of the biggest Ponzi schemes in history, operating from
07

Video of Grenada PM receiving ‘bribe’ surfaces in US, Grenada Gov’t refuses to request a copy

Grenada authorities have turned down the offer of a video tape showing their Prime Minister receiving a $500,000 cash ‘bribe' from investment fraudster Eric Resteiner, OffshoreAlert can reveal.They were notified more than 12 months ago by Resteiner's attorney, John Amabile, that a copy of the six-year-old tape still existed and that it could be obtained through a formal request for assistance to the authorities in the United States, where Resteiner is in custody awaiting sentencing for seven counts of mail and wire fraud to which he pleaded guilty earlier this year at the U. S. District Court for the District of Massachusetts.
22

USA's Sentencing Memorandum in USA v. Rita L. Regale, Douglas C. Ferguson, Robert J. Skirving, and Laurent E. Barnabe at the U. S. District Court for the District of Oregon. Editor's Note: This document is notable for its reference to testimony by Grenada's former chief financial services regulator, Michael Creft, in which he acknowledged bribery and corruption.
28

Eight years after their offshore scam was first exposed by OffshoreAlert, four former officers of the First International Bank of Grenada were sentenced yesterday to prison terms of between one-and-a-half and eight years.