Cayman Islands Immigration Board approves Ann Nealon's work permit for Walkers law firm by a vote of two to one; Banc Caribe potential target for Cash 4 Titles victims; Antigua assures USA that William Cooper will be extradited; Scott Oliver leaves Lines Overseas Management; and Hundreds of Caribbean immigrants living in the US and residents of Dominica lose $1.2 million in investment scam.

Offshore Alert's story about the banking/insurance scam that appeared in last month's edition of the newsletter has created quite a stir in the Caribbean. Several newspapers in the region followed up on the scandal, including those in Nevis, St. Vincent and Bermuda, and we received requests for assistance from the Royal Canadian Mounted Police and the the FBI. 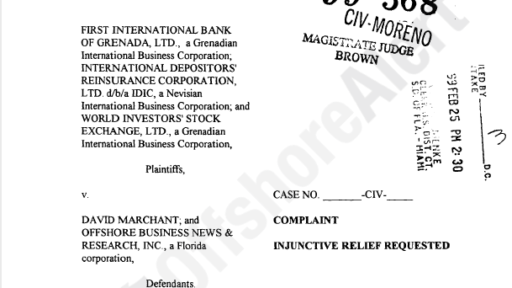 ‘I see no evidence of fraud’, writes Grenada’s Chief Regulator

Letter to the Editor of Offshore Alert from Michael Creft, Grenada's Chief Regulator regarding the First International Bank of Grenada.

‘I see no evidence of fraud by FIBG,’ writes Grenada regulator Michael Creft

Scott Oliver’s bank: The hunt is over

Lines Overseas Management is standing by its Cayman-based salesman Scott Oliver despite the fact that a bank he is linked with is part of a major fraud and is operating illegally from Bermuda, where LOM is headquartered. LOM has decided not to fire him even though, five months after Offshore Alert caught him claiming in LOM marketing material to be 'an advisor to the International Exchange Bank of Bermuda', we have found that such a bank has indeed been operating illegally on the island.

Attorneys threaten OffshoreAlert with lawsuit over exposé of insurance-banking fraud

Banking-insurance scam advertisements ask investors to sign away their assets

An interesting column was published in the Turks & Caicos Islands Free Press on November 26 in which Opposition MP Norman Saunders argued that the government must statutorily hold a General Election by February 17, 1999 when it would have ruled for precisely four years; Still in the Turks & Caicos Islands, where the strangest things often happen. New Chief Justice Richard Ground halted the trial of a man charged with two counts of possession of cannabis and possession with intent to supply after two jurors were seen getting into the same taxi as the defendant and the defendant's main witness following the end of the first day of the trial; Nowhere does a country's politicians have a more one-sided or forgiving relationship with God than in the Cayman Islands; The Cayman government has spent considerable amounts of tax-payers' money to take out a court injunction against the local Caymanian Compass newspaper to prevent those same taxpayers from seeing all or part of the monopoly agreement the government has with the much-reviled telecommunications carrier Cable & Wireless; As regular readers of this newsletter should be aware, we recently caught Lines Overseas Management salesman Scott Oliver lying to potential clients about his credentials by claiming he was on the board of advisors of the International Exchange Bank of Bermuda, which does not exist; and Grant Gibbons, who was Bermuda's Finance Minister until the UBP lost the General Election on November 9, has been appointed a founding director of a newly-formed holding company that intends to raise $1 billion for a life and annuity reinsurer.

As regular readers of this newsletter should be aware, we recently caught Lines Overseas Management salesman Scott Oliver lying to potential clients about his credentials by claiming he was on the board of advisors of the International Exchange Bank of Bermuda, which does not exist. After being exposed, Oliver sent out e-mails to associates in which he claimed that "this bank was not registered in Bermuda as initially discussed but instead was registered in another British Commonwealth offshore jurisdiction". He also declared that he was no longer an advisor to the 'bank'.

An investment officer with Lines Overseas Management (Cayman) Limited has been caught misleading potential clients about his credentials by claiming in promotional literature that he sits on the board of advisors of a Bermuda bank that does not exist, we can reveal. At the centre of the controversy is Scott Oliver, a Scotsman who describes himself as an 'offshore financial strategist' for LOM, working from the company's offices in Buckingham Square, West Bay Road, Grand Cayman.