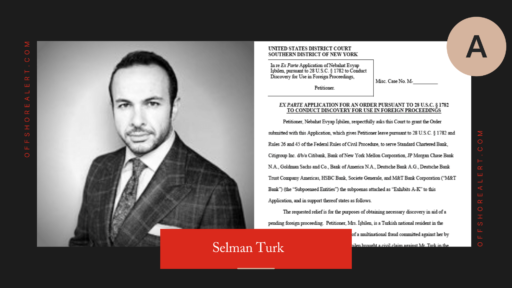 Nebahat Evyap İşbilen, described as the 76-year-old wife of an imprisoned former member of parliament in Turkey, is seeking discovery from 11 banks in New York for a civil lawsuit in London against entities in the British Virgin Islands, Cayman Islands, England, Jersey, and United Arab Emirates for an alleged £40 million-plus fraud.

Originating Summons in Nebahat Evyap İşbilen, who appears to be from Turkey v. Sentinel Global Asset Management Inc. and Sentinel Global Partners Ltd. at the Grand Court of the Cayman Islands.