Complaint to Protect Against Retaliation in Fraud Cases in Donald Turnbull, who alleges he was "fired ... from his job as a commodities trader because, by cooperating in good faith with a federal investigation into the Bank's trading practices" v. JPMorgan Chase & Co. at the U. S. District Court for the Southern District of New York.

Defendants' Notice of Removal, including a copy of the complaint seeking damages "for breach of fiduciary duty, tortious interference with business relations, breach of contract and declaratory judgment to set aside an unlawful and unethical contract entered into with Defendants to share the proceeds of a law firm with a non-lawyer independent contractor", in The Roberto Gonzalez Law Firm, d.b.a. Whistleblowers International, of the District of Columbia v. Global Litigation Consulting Services LLC, of Puerto Rico, and Christopher Piacentile, described as a resident of Puerto Rico and New York, at the U. S. District Court for the Southern District of New York. 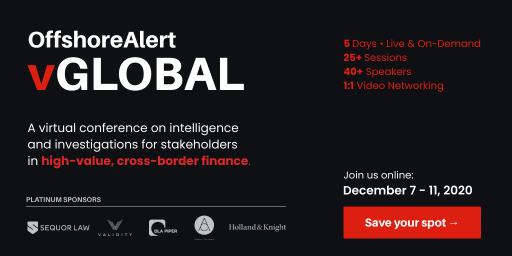 US Whistleblower Bosses To Discuss Huge Rewards at vGLOBAL

Statement of Allegations in a proceeding against Coinsquare Ltd., described as "a crypto asset trading platform located in Toronto"; Cole Diamond, Virgile Rostand, and Felix Mazer "to hold them accountable for their misconduct and to send a message to other market participants in the crypto asset sector that deceptive conduct will not be tolerated in Ontario's capital markets", at the Ontario Securities Commission. The allegations include market manipulation and "a reprisal against an internal whistleblower".

Complaint alleging whistleblower retaliation, defamation, and wrongful termination regarding "a serious concern of financial fraud, investor fraud, deceptive accounting practices and tax evasion by Ignite", which "is in the business of selling cannabidiol, cannabis, and beverage products", in Curtis Heffernan v. Ignite International Ltd., of Wyoming; Ignite International Brands Ltd., of Canada, and Dan Bilzerian at the Superior Court for the State of California, County of Los Angeles.

Complaint by "a senior executive in the banking industry" against his former employer alleging retaliation for being a whistleblower about "the legality of Defendants' asset management services" in John 'Jack' Yang v. The Bank of New York Mellon Corporation, described as a Delaware-domiciled "global financial services company" based in New York; Alcentra NY LLC, described as a Delaware-domiciled "registered investment adviser" based in New York, and Alcentra Limited, described as a British asset manager based in London, at the U. S. District Court for the Southern District of New York.

Complaint alleging fraud, negligent misrepresentation, and intentional interference with advantageous or business relationship regarding Plaintiff's book 'Lucifer's Banker: The Untold Story of How I destroyed Swiss Bank Secrecy' in Bradley C. Birkenfeld, a United States citizen residing in Malta who is best-known for whistleblowing on UBA AG, of Switzerland v. Leonard A. Lauder, described as "chairman emeritus" and former CEO of Estée Lauder cosmetics and fragrances firm, and Kevin M. Costner, described as "an American actor, director, producer, and musician", at the Circuit Court of the 15th Judicial Circuit, in and for Palm Beach County, Florida. Editor's Note: This complaint was filed at state court in Florida 12 days after a similar complaint was dismissed at federal court in Miami for "lack of jurisdiction".

Two "whistleblowers" in India and England are suing the British, Dubai and New York operations of their former employer, Standard Chartered Bank, for allegedly retaliating against them for exposing "a highly sophisticated money laundering scheme on behalf of Iran".

This session will examine the investigation that exposed the computer hacker behind the huge theft of confidential information from the international football industry and also ask whether, in this era of leaked data, the media and others are now too

How Non-U.S. Citizens Can Participate in U.S. Whistleblower Reward Programs

How Non-U.S. Citizens Can Participate in U.S. Whistleblower Reward Programs

Whistleblower Complaint to the Intelligence Committees of the U. S. Senate and House of Representatives regarding allegations of abuse of office involving U. S. President Donald Trump and the Government of Ukraine.

Complaint in Bradley C. Birkenfeld, of Malta v. Leonard A. Lauder and Kevin M. Costner at the U. S. District Court for the Southern District of Florida.

A Whistleblower’s Guide To The Bounty: How to Confidentially Blow the Whistle & Qualify for Multi-Million Dollar Rewards

In this session, whistleblowers' attorney Steve Kohn will discuss how his client, Howard Wilkinson, blew the whistle on his former employer, Denmark-based Danske Bank, which has been implicated in a €200 billion Russian money laundering scandal and is now being criminally investigated in the UK, US, France, and Estonia. Steve will discuss opportunities for whistleblowers to become multi-millionaires by exposing wrongdoing in global financial institutions and other types of companies, both in the United States and overseas. 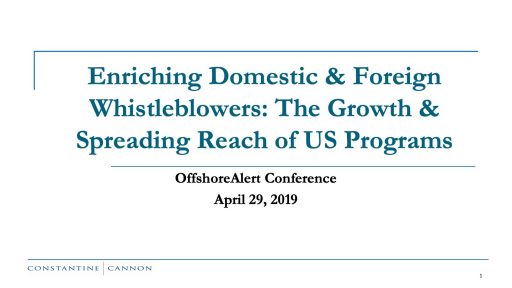 Several years after major US criminal and regulatory agencies adopted whistleblower rewards programs, this session will analyze how they are performing and how much money has been paid out. It will include looking at the increasing number of rewards applications being submitted on behalf of offshore whistleblowers. 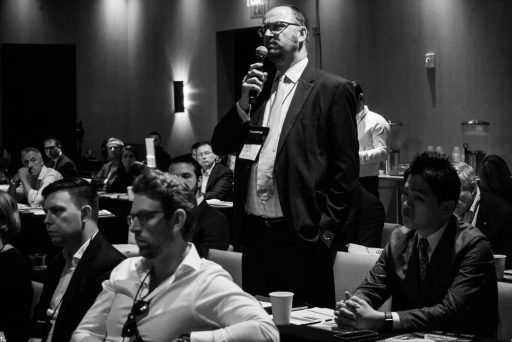 How To Make Millions From Whistleblowing

Hear from the heads of the whistleblower units of the SEC, the CFTC, and the IRS, Stephen Kohn, who represents the Danske Bank whistleblower, and Canadian securities regulator Christine Tabbert.

Amended Answer and Affirmative Defenses of Joseph Bird in Shareef Abdou v. Brian Mahany, Mahany & Ertl LLC, and Joseph C. Bird at the U. S. District Court for the Eastern District of Wisconsin.

Answer and Affirmative Defenses of Brian Mahany and Mahany and Ertl in Shareef Abdou v. Brian Mahany, Mahany & Ertl LLC, and Joseph Bird at the U. S. District Court for the Eastern District of Wisconsin.

In this session, whistleblowers' attorney Steve Kohn will discuss how his client, Howard Wilkinson, blew the whistle on his former employer, Denmark based Danske Bank, which has been implicated in a €200 billion Russian money laundering scandal and is now

Inside Liechtenstein: Are Trustees Misappropriating Assets When Clients Die & What Are The Remedies?

In the early 1990s, Information Technology specialist Klaus Lins claimed to have discovered evidence that Liechtenstein's biggest fiduciary was misappropriating the assets of wealthy clients when they died, instead of distributing them to beneficiaries. Lins turned whistleblower but the only

IRS Whistleblower Program 10 Years On: What Works, What Doesn’t & What Must Change

Experts on the IRS Whistleblower Program will discuss the program's evolution, their own personal experiences in working within the program, what works, what doesn't and what needs to change.

Whistleblowers Discuss What Really Goes On Inside International Banks

There is compelling evidence that many of the world's leading banks pay lip service to compliance and, if fees are high enough, will knowingly engage in criminal activity on behalf of clients. In this session, two whistleblowers will discuss what really went on inside their former employers.

Inside The UBS & HSBC Leaks

OffshoreAlert has assembled a panel of the most important people in the history of whistleblowing to take you inside the UBS and HSBC leaks and discuss material issues, including the treatment of whistleblowers by law enforcement and tax collection agencies, how the system can be improved, the extent of global tax evasion and the involvement of the world's major banks.

Watch Now View Trailer This session will look at the latest developments in whistleblower programs operated by the SEC, CFTC and the IRS.

For the first time in one public forum, the chiefs of the SEC, CFTC and IRS whistleblower offices will discuss Whistleblowing as a tool to fight financial crime at The 10th Annual OffshoreAlert Conference. Sean McKessy (SEC), Vince Martinez (CFTC),

Criminal Indictment in USA v. Bradley Birkenfeld and Mario Staggl at the U. S. District Court for the Southern District of Florida.